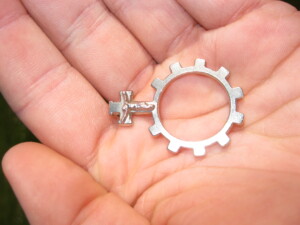 How does the religious object of a rosary become a symbol of an emancipated woman before it develops to a symbol of eternal family love for a young history student? Find out about the latest item in the MEMORY SUITCASE!

This soldier’s rosary was a gift from my grandmother. She gave it to me when I went to Japan for a few weeks. “One day this was given to me, now I give it to you”, she said. I loved her present from the first moment.  It was not only a symbol of connection with God, but it had a story as well:

She went everywhere. She knew many people. She was a very open-minded and caring person. My grandmother assumed that ‘Klein Tantchen Gertrud’ got the rosary from a soldier she might have interviewed. Whether it has been a British, an American or a German one, or what it meant to Gertrud – she had no clue. The early fascination about Gertrud’s liberty and behaviour stayed with my grandmother for 55 years.  A different lifestyle and a notion of the times to come were engraved in a way in the little rosary she inherited and kept. .

This background-story is quite important, but when I inherited the rosary, its symbolic meaning had completely changed. I have never met Gertrud. For me, it is not a symbol  of female liberty, as it was for my grandmother, but more a symbol of always present family love. From the moment she gave me the object that was so important to her, I somehow knew more strongly that she is someone who cares about me. Because of this deep personal meaning, I always have the rosary with me, either in my pocket or on my desk. 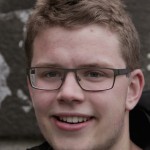 Gregor Christiansmeyer
(1996) is a German Eustorian who is studying history and political science in Münster, a city in western Germany. He enjoys meeting new people, having discussions and fun together. He is always delighted when he finds nice postcards in his letter box – they have got a place of honour in his room.

Gregor Christiansmeyer
(1996) is a German Eustorian who has been doing his Bachelors in history and political science in Münster; after a year of internships he currently is a graduate student in Göttingen. He enjoys meeting new people, having discussions and fun together. Gregor is always delighted when he finds nice postcards in his letter box – they have got a place of honour in his room.