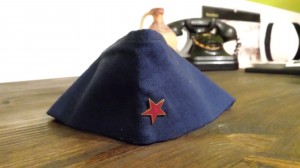 A bit of uniforms here, a pinch of ideology there and abracadabra – that’s how youngsters are often charmed into a common ideology. But Tamara can look thorough its surface and still pull a virtue out of the ideology hat. See our first MEMORY SUITCASE item!

Back in the day when there was still Yugoslavia, a lot was done for ideological indoctrination as well as for creating the feeling of unity between nations. One of activities that started in the early stage of a person’s life was becoming Tito’s pioneer. Tito’s pioneers wore white shirts, blue skirts or trousers, red neckerchief and a blue hat with a red star on it. The hat in the photo was a part of my mother’s pioneer uniform back in the 1970’s.

She gave me the hat some years ago. That was probably around the time when I started to show great interest in history and wanted to hear more about ‘the wonder’ of Tito’s pioneers. Nowadays I understand the reasons behind many of the activities and events that were organized by the Party much better and I can distinguish the positive from the negative characteristics of Tito’s regime. However, I still see the unity between the nations, which was created also through the pioneer organizations, as a wondrous phenomenon – especially in the light of the wars that followed in 1990’s.

Hence, for me this hat symbolizes something that goes far beyond the primary meanings of the symbols it contains, for me it symbolizes the idea of unity, brotherhood and sisterhood of people.

Series Memory Suitcase  In the course of our lives we become attached to certain items that were given to us. And no matter if we carry them in our bags, or in our minds, they become a symbol of who we are, of our personal history. Now it’s time to get those heritage items out and share them with the world. We will publish here on a regular basis stories from young people about things they inherited and what they mean to them.