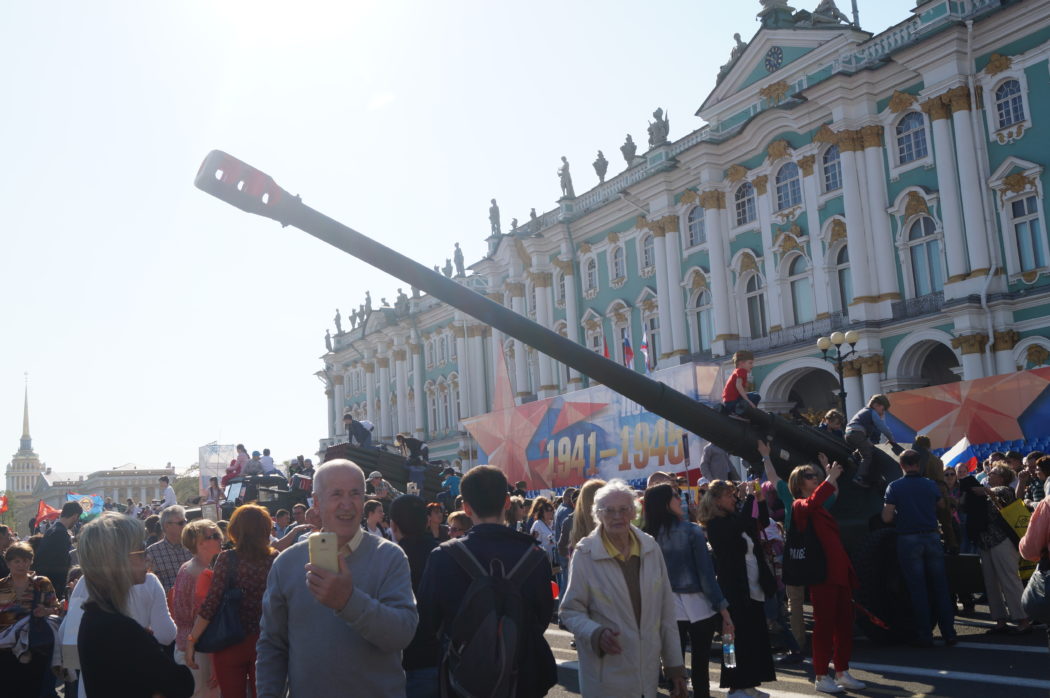 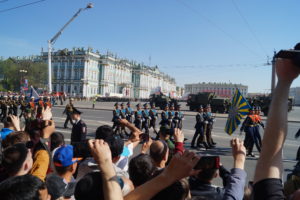 Marching soldiers, cheering crowds, tanks and cannon fire. The martial and enthusiastic manner of the May 9 parade in St. Petersburg, celebrating the victory over Nazi-Germany and the end of World War II, reminded Daniela, who is spending a voluntary social year in Russia, of the horror of war, triggering tears of fear and an intense stream of thoughts.

What would happen if a war broke out now? Would the people also be so euphoric? Would it be possible again to create hatred between neighbouring countries? As the 9th May came closer, the Russian Victory became more and more present in every day’s life, here in St. Petersburg.

In these days we Germans stood even more out of the crowd, than we normally do. Lots of people, who heard us speaking German, threw a glance at us, with a mix of anger and triumph.

That was one of the reasons why we thought a lot about the question how to behave on the 9th May. Should we really go to the Palace Square and watch the military parade? Could it be dangerous for us? Because some years ago another German volunteer got basted during this parade. Should we speak German, or better change to another language?

In the end we decided to join the celebration, but only to speak English. This turned out to be a good decision, because even speaking English set us apart from the crowd and we earned suspicious glances. And if we nevertheless talked some words in German the suspicious looks became even darker. 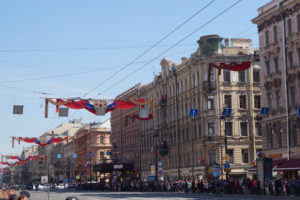 Already two weeks before the celebration the Nevsky Prospekt (main street in the city centre) was decorated. In every (book)store, at the exit of every metro station and almost every where in the centre you could buy Russian or Soviet flags, as well as military heads with a red star on the front. Everyone was wearing a black and orange tape, to associate with the victory of their home country. You were no longer greeted with “Hello”, but with: “С Днем победы“  – “To the day of victory“.

“Ready to protect my fatherland” – The military parade

The celebration of 9th May started with a huge military parade in the morning on the Palace Square, in the front of the Hermitage –  the heart of the city. The square was crowed with soldiers from different units of the Russian Army. On the right side a stage was put up, on the left a big tribune, where the veterans sat. The soldiers sang, shouted and cheered, always joined by the tremendous crowd of spectators. After a speech, the national anthem and cannon-fire, soldiers began to march across the palace square, passing the cheering crowd, heading down the Nevsky Prospekt-street.

Afterwards huge military trucks, carrying even more soldiers, were followed by tanks driving across the Palace Square to celebrate the victory and to show the Russian power. This was way too much for us Germans. I stood in the crowd, encircled by cheering and screaming Russians, and couldn’t help myself, but started to cry. All those people rejoicing the war, celebrating the soldiers like movie stars and parents encouraging – even forcing – their children to look at the spectacle and to join the cheering. 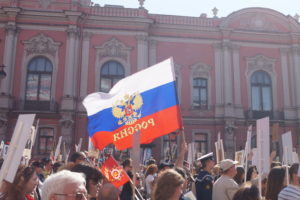 I met a Russian man, who told me he had already served his military duty. He emphasised: “I’m ready! I’m training everyday. If a war broke out now, I would be ready to protect my fatherland. “

That is why many questions came into my mind: What would happen if a war broke out now? Would the people also be so euphoric? Would they be willing to kill their “enemy “? To kill a human being? Would it be possible again to create such a hatred between neighbouring countries? Not on a political level, but on the level of everyone’s daily life.

This parade made me become even more pacifistic than I was before. Everything connected to war, especially the canon-fire and the soldiers’ shouting were tremendously intimidating.

I couldn’t believe what I just witnessed. I was staggered and also cowed by the people’s fascination and enthusiasm for soldiers, tanks, weapons, and even the war itself. How can people find so much joy in such a cruel thing, such as war?

Of course, they were celebrating their victory, but even 71 years after the end of World War II, enthusiasm and pride is still present now.

After this experience I really needed a break to calm down, but nowhere in the city it was possible to find a place without cheering people, soldiers and marks of the victory.

In the afternoon, the moving part of the celebration took place – the veteran’s parade. 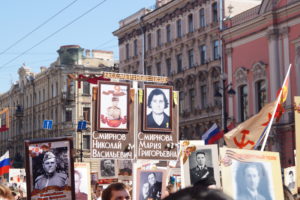 Thousands of people were walking down the Nevsky-street (about 4km long), heading towards the Palace Square. They raised pictures of their family members, who lost their live in World War II. All the way people from the sides joined them. They were singing national songs, some were even wearing the national costumes of their regions, and all the time one could hear “С Днем победы“.

I really liked the behaviour of the spectators towards the veterans. They thanked them, gave them flowers and acclaimed them. In my opinion, this is the right way to celebrate the victory – by thanking and honouring the veterans, and not with an overenthusiasm towards tanks and soldiers.

Since the veteran’s parade had started, the city was crowed with thousands of people. Neither busses, nor metros were working in the centre. Especially at the Palace Square one couldn’t even walk three meters without someone crossing your way. 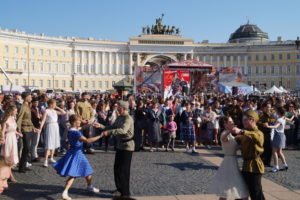 One big and four small stages were set up– on each either a band or a sailors’ choir was performing. In front of them soldiers were dancing with women, dressed in typical dresses of the 40’s and 50’s.

The atmosphere was filled with joy, happiness and laughter. It seemed like every citizen of St. Petersburg was celebrating. I definitely felt more comfortable during this part of the celebration, than during the military parade. 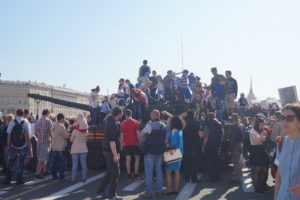 Yet there was one thing that bothered me – four tanks stood right in front of the Hermitage, and children were climbing up on them, taking pictures with soldiers and even pretending to be soldiers. Of course I know, that it is a rather normal behaviour for children, but in this particular moment, considering the day and the fact that they stood on real tanks, I just couldn’t find a positive thing in that. In my opinion a tank is definitely not an appropriate playground for a child. It really bothers me, that children are brought closer to the topic of war in such a positive way, particularly in such a young age.

How to feel about war after such a day?

The whole day made me really thoughtful. I still don’t know what to think about the fact, that I, a German, stood in the crowd, which celebrated the victory over my home country. Of course, we were fortunately liberated from the Nazi-regime, but still there is a strange feeling involved.

And then a question came into my mind: Can patriotism be dangerous if connected with war?

How would we had celebrated the victory in Germany if the Nazis would’ve won the war? Wouldn’t we have grown up the same way, like Russian children do? – Proud of our home country, grown up with a strong patriotism?  Interested in war and willing to fight for our fatherland?  Would I also celebrate the “martyr’s death” of my ancestors?

– Questions I can’t answer, or maybe just don’t want to find an answer for.

The one thing I can say for sure is that this day, the 9th May, was one of the most impressive days during my volunteer year here in Russia. It made me think about my origin, my home country, my new “home” Russia and about my position towards war and patriotism. An experience that still keeps me thinking and will accompany me quite a while…

Daniela Brandt
Daniela is a 18-year-old volunteer from Germany. She is spending her gap year volunteering in St. Petersburg, Russia, where she works with disabled children.