Mafia has always been a strong presence in the Italian country. Some Italians, instead of accepting the situation, raised their head and proved that Mafia can be defeated with a constant fight for legality. Among them were the two magistrates Giovanni Falcone and Paolo Borsellino, murdered by the organised criminality 25 years ago. Viola Berti, a young Italian, describes the importance of the Anniversary and the two men’s legacy for her and in contemporary Italy. 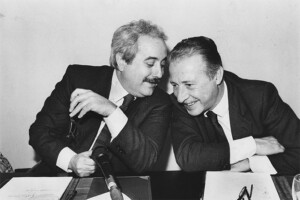 Falcone and Borsellino in 1992. Ph. wikipedia.org

As a young Italian citizen, I often hear my country addressed abroad as the homeland of Mafia, criminality and corruption. The last out of several times was around a month ago. Some American friends I met during my vacation in England told me that the Italians invented the organised criminality and exported it around the world. This is at least partly true and always makes me sad. But there have always been people who did not accept this, who fought for justice and against crime. Two of them were Giovanni Falcone and Paolo Borsellino, judges and heroes in the fight against Mafia, as well as two of the victims of a series of murders set up by Cosa nostra, the Sicilian Mafia branch. They make me still believe in the importance of contributing personally to build a better Italy. 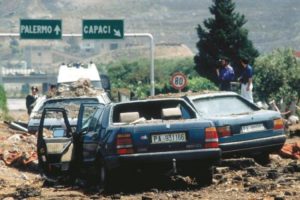 The Capaci massacre nearby Palermo, where Falcone, his wife and the bodyguards were killed while heading to the city centre from the airport. Ph. wikipedia.org

Giovanni Falcone died on 23 May 1992 in a highway explosion near Palermo. His colleague and friend Paolo Borsellino faced the same destiny on 19 July 1992. When I was 16 years old, I bought the book “Massacre” and read for the first time about their story. Shocking photos of the exploded highway and destroyed city-street accompanied it. A Falcone’s and Borsellino’s portrait showed their serenity and internal force a few days before the first murder. They were aware of the probable execution and still faithful in their mission. I realised how imperative it was for me to raise against moral deterioration and to build a better country. I understood fear is not a justification for accepting what happens. I still consider Falcone’s and Borsellino’s historic and moral legacy today as unique and irreplaceable in the Italian history.

To continue what they started, I joined Libera, an association founded indeed with the goal of collecting their inheritance. It has several teams all over the country and allows ordinary citizens to contribute in the fight for legality.

In the last two years, I had the chance to take part in the Libera team founded in my high school, experiencing a unique combination of education, information and remembrance. 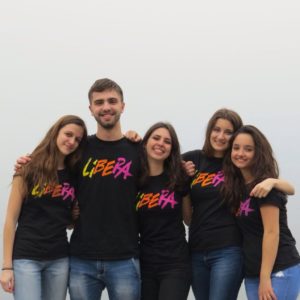 I became a more conscious citizen. Girls and boys aged 14 to 19 are welcome to take part in the team and its activities. During our meetings, we share and compare our multiple (for age and background differences) points of view on the most significant episodes involving Mafia and work on projects together. The most successful until now was the fair we organized, selling Libera products. Those products are different types of food, generally deriving from Libera’s agro-food companies. These cooperatives are built on lands confiscated from Mafia and reunify many different workers. Farmers and entrepreneurs who refused to pay the “Pizzo” (the special tax that Mafia requires in exchange to protection) are employed there. Additionally, also volunteers can experience agricultural activities there. The funds we raised were destined to turn more confiscated land into such companies, to Mafia’s victims and their families and to support undercover witnesses. These experiences have been unique and meaningful for me, especially in the last months that we dedicated to the celebrations for the 25th Anniversary of the murders of Falcone and Borsellino, the two people who started what has become my own battle.

To remember them and their sacrifice, we organised a meeting within our high school, to discuss the significance that their work has for us. We first watched some documentaries and short movies about the two murders showing the way the two judges were isolated by their colleagues and all the institutions during their last months. This was shocking to us and lead to discussions like if their death was too much emphasised. Surely, they worked intensively in the fight against Cosa nostra. Without doubts, they found opposition within the institutions themselves. “This is confirmed”, said one of our classmates, “by several lacks that have occurred during the investigations about their deaths”. We remembered the episode of Paolo Borsellino’s red notebook, where he used to keep record of his work and which disappeared after his death. 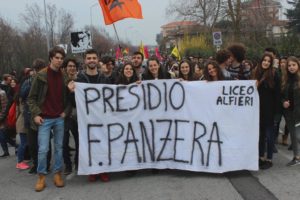 Viola’s team during a demonstration in honour of Falcone and Borsellino. Ph. Vittoria Arnaldi

The second crucial question for us was: if corruption has reached the institutions, who can do something to improve our country? Definitely us, the young people who will inherit it. But how? Exactly as the two judges did, forgetting skepticism and resignation. Many years have passed and we live in Northern Italy, far from Southern regions, where Mafia’s presence is much stronger. But —I concluded for the revolution they introduced in the fight against Mafia and for the fight for legality they embody, Falcone and Borsellino are two significant figures to me. They inspire and push me to get involved in Libera’s new projects every day.

They were so brave to raise their heads against the Cosa nostra bosses, damaging the organization from top to lowest members with hundreds of condemnations and arrests. The two magistrates reunified all the Mafia trials in one big trial, the “Maxi Trial”, taking place in Palermo, to reduce the risks of evidence dispersal and threats to witnesses.

In the years 1992 and 1993, Cosa nostra’s reaction to the “Maxi Trial” was extremely violent. The two anti-Mafia symbols’ murders represented a war declaration from Mafia to the Government that culminated in several terroristic attacks in the major cities, like the Via Georgofili massacre in Florence in May 1993 that counted 5 killed and around 40 wounded.

To stop the massacres, the Government started to find agreements with the criminal organisation. The so-called “Negotiation” began. From that time on, Mafia influenced the institutions more deeply than ever, through corruption of their members and vote-trade (for example, some magistrates denounced the support granted to Silvio Berlusconi and his new born party “Forza Italia” in the 1994 elections, in exchange to judiciary favors. However, no crucial evidence of this was ever found). 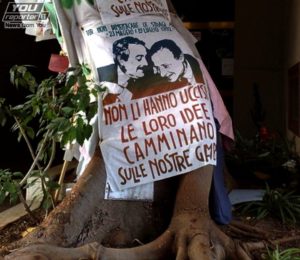 Two trees were planted as memorials in front of Falcone’s and Borsellino’s houses in Palermo. On one of them it’s written: “They did not kill them. Their ideas walk on our legs”. Ph. ultimaTv

The 25th anniversary of the judges’ murders is for me, as for many other young Italians, important and meaningful. I grew up in a country where even the party that ruled for 10 years is probably deeply corrupted and for this reason it is not easy for me to have faith in justice and in the State. The two judges give me hope: I believe that an alternative is still possible.

Falcone once said: «Mafia is a human phenomenon and consequently, it must have an origin, a development and an end». The love of the two magistrates for justice remains the biggest inspiration for young people who want to work for a change. A change we see closer and closer. A change in which we put many efforts, as those fighting against Mafia are not superheroes, but ordinary citizens who give day by day their small contribution on the road to legality.

Viola Berti
Viola (born in 1999) attends high school, with special focus on humanistic subjects. She studies much ancient Greek and Latin, but her deep passion is Physics (go coherence!). Therefore, her major hobby is reading books on this topic. She also enjoys keeping informed about the reality surrounding her and enlarge her culture through Sudoku and crosswords. In the future, she hopes to find a job to be passionate about and that allows her to travel a lot.