Remembering World War II is difficult in many countries. In Italy, however, the narration of “us” against “them” is even more difficult, since the country was not occupied by enemies, but Benito Mussolini was a strong ally of Hitler’s Germany even before the war. Only when a new government ousted Mussolini in 1943, German army occupied Northern Italy. In this part of the country, partisans raised and fought to release their country. Camilla Crovella’s family keeps a personal treasure as memory of those fights.

When my grandfather and his sister are describing this two years of occupation, known as the “Resistance”, they mention a general atmosphere of fear, poverty and lack of information. 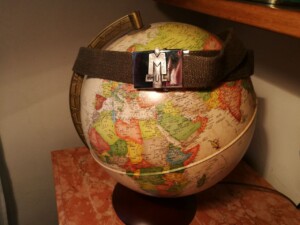 My grandfather was a primary school student during war times, his sister already was in high school. In 1945, my grandpa attended the third class and used to spend his afternoons either playing with other children or helping his mother with housework. Additionally, he listened a lot to witnesses from the battlefields and became fascinated by the figures of the partisans (the volunteer soldiers fighting in the resistance against fascists and nazis) and the war tales behind them.

For his great interest in those stories, my grandfather became closed to one of them, Giuseppe, whose courtesy and kindness he still remembers today. The belt he donated to my grandpa is one of the most precious family memories we have. It was a curious object to be worn by a Partisan, as evidently part of the Fascist Army’s supplies. This could be seen from the buckle, decorated with an M (for Mussolini), the Fasces (symbol of the Fascist Regime) and the acronyms GIL (indicating the group of the Fascist Youth Movement).

Giuseppe told my grandpa that the belt was a fascist soldier’s gift, whom he met, wounded, after a battle. He helped him to reach the nearest Red Cross center. As the soldier’s leg was hurt, Giuseppe had to carry him on his back for half of the way. Giuseppe was from Southern Italy and he became a friend to my grandfather when he was hosted in 1945 in our family house in the countryside, where my grandpa, at the time 7 years old, his sister and his mother moved in 1942, after the Allies’ huge bombing operation on Turin. When Guiseppe left our house, after the Liberation of Northern Italy in April 1945, he donated his belt to my grandpa. This encounter was extremely meaningful for my grandpa, as it helped him to answer questions he had about those partisans, which animated his curiosity, but whom he had never seen. 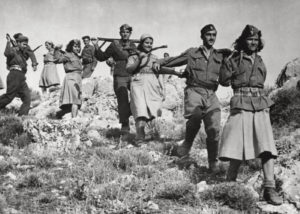 Women fought in the Resistance too.
Ph. Mondadori Portfolio

For my grandpa, as for the many other civilians, partisans were some sort of a legend – some were not even sure they actually existed. And even if they were the “good ones”, it was especially difficult for my grandpa’s family that always had great faith in the Italian monarchy, to consider a power not codified in the traditional ruling system as something to trust in. It was only when they met Giuseppe that they changed their mind. They understood the Partisans were brave citizens who had decided to raise against the oppressors and reconquer their country on their own. And, as Giuseppe’s belt witnesses, they were not fighting just for themselves but for every Italian, even those still supporting the Fascists.

That is why this belt is a very meaningful memory for my family. It doesn’t only remind us of Giuseppe, but it is also historically and humanly significant. For my grandpa, as probably for Giuseppe, it means that war declarations cannot overcome human solidarity; that people from different formations can give up their ideological differences and help each other.

My grandfather’s message is strong ideologically unbreakable, but this kind of human solidarity is very rare in reality. One good example is the migration topic: instead of showing solidarity, the major response in Europe is closing the borders. In other cases, like in Italy, many citizens deny the right to integration for them.

Italy is neither divided nor at war today, but I think it would still need some of his fraternal spirit my grandfather has experienced.

Camilla
Camilla (born 1993) is a student from Turin, Italy. Her interests include European History, German language and culture and backpack travelling. But everybody knows her for her unconditioned love for Thai food and energetic coffees.