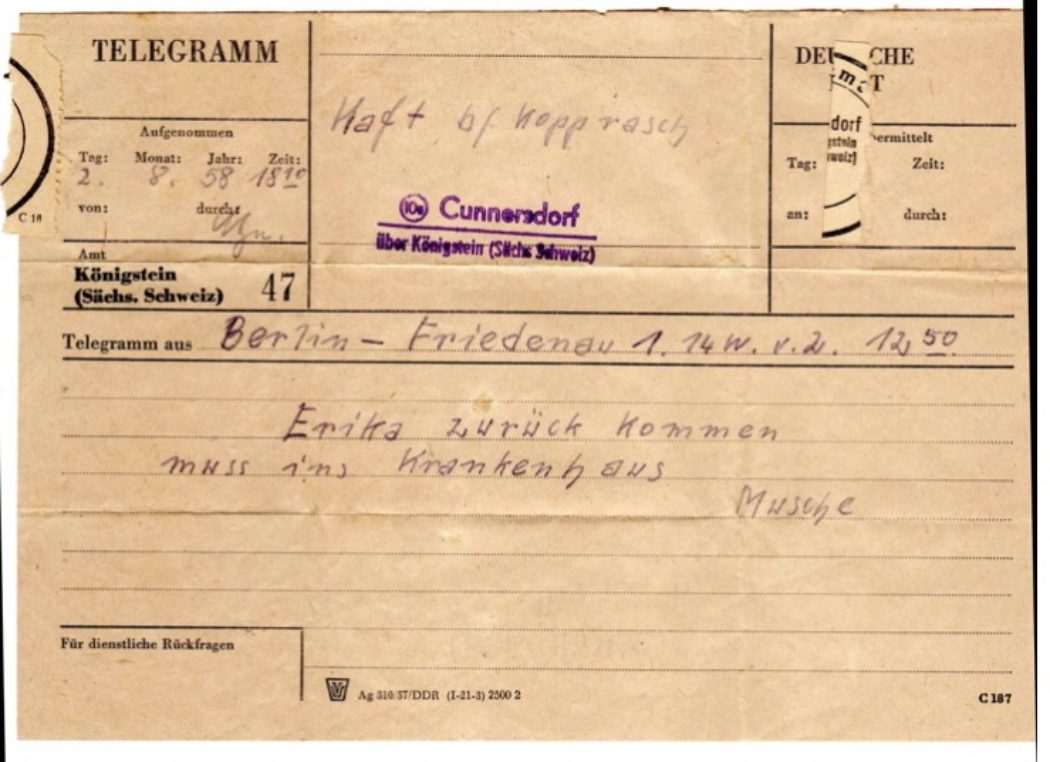 Do you know the feeling of being able to hold the reason why you live actually in your hands? Neasa does and tells us the story of a telegram and her reunited family without which she wouldn’t be alive.

The original copy of an old German telegram dating from 1958 is among the objects of highest sentimental value for me and my family. This item was hidden between the pages of an old log journal. The latter consisting of the records of my German relatives from my grandmother’s side of the family dating all the way back to the late 17th century. This telegram is of special significance to me because it was the reason my grandmother, her brother and her parents were able to flee  just before the Communist state finished building the wall that divided Germany and Europe.

A Fake Stroke to Escape

The telegram was sent from Berlin-Friedenau on the 2nd August 1958 at 12:50 and was received at 18:10. It reads “Erika zurück kommen, muss ins Krankenhaus” (Erika come back, have to go to hospital). This was an emergency message from my grandmother’s aunt, in which she claimed that my great-great grandmother had suffered a stroke and was in the hospital. In fact it was a bogus message sent to my grandmother’s family in order for them to have a good reason to cross the border into the Western part of Berlin. My Oma and her family were living in Pankow, in the Soviet Sector, while her aunt and grandmother lived together in Friedenau, in the American Sector.

At the time, the family was on holiday in Königstein (a small city near the Czechoslovak border) for the summer and because this was a serious emergency, it gave them a solid reason to go back. They left their holiday location and went straight to their relatives in West Berlin. By doing so, they neither had to go through a “Lager” nor the security control that would have applied had they left directly from East Berlin. Because of this, the family subsequently couldn’t get any financial support from the state in West-Germany, but luckily they already had a flat in Flensburg (right at the Danish border), where my great-grandfather had also managed to get a position as a pharmacist.

A Doll Left Behind

Such an escape was commonly known as “Republikflucht” or “Desertion from the republic”. My grandmother told me that she was furious because she was never going to see her home again. She had also left behind an irreplaceable doll that she had borrowed from her friend in her old house and was upset that she couldn’t return it. Homes that were abandoned by people who had fled East Berlin were often immediately raided and ransacked by the police. The family had been planning their escape for a very long time, which is why they were able to send some personal items to the west beforehand. Knowing that they were forced to flee their native Berlin is saddening, especially because I learned recently that at least five generations of my family had lived in the city up until then.

This telegram, without any shred of doubt, is an important item for me, because it is a symbol of my family’s successful, yet narrow escape from Communist rule. In the so-called “German Democratic Republic” the people were under the full control of the state. They were not allowed to express their own opinions in public, they did not have the freedom to live their lives the way they wanted to and they were forbidden from practicing any faith or believing in any political ideas, other than the Communist ideology. It was the opposite of democracy. The “Iron Curtain” divided Europe and could have also divided my family. Without those thirty-five letters in six words I would have never existed.

Neasa
Hi, my name is Neasa Schukat and I’m 19 years old. I’m half Irish, half German and I grew up in Galway, in the west of Ireland. I’m in my first year of studying Film & Digital Media in Galway, and my hobbies include writing, reading, art, films, music and researching history.