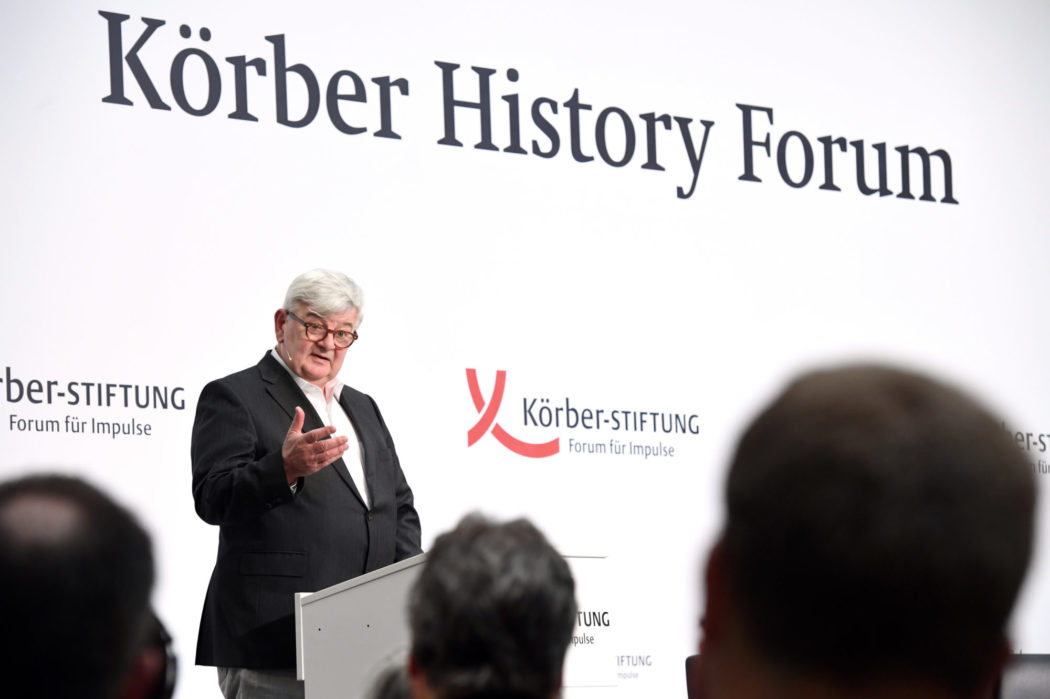 Joschka Fischer, once perceived as symbol of a new political era, is now writing books and giving speeches on political crisis, the West without a leader, democracies in danger. For younger people, he is already part of history, as far back as the revolt of 1968. Gregor Christiansmeyer is responding to Joschka Fischers thesis on “the End of the West” and reflecting his feelings when meeting a political leader with perspectives on politics different from Gregor’s generation.

Seeing me wearing my suit the receptionist of the Humboldt Carré in Berlin is indicating me the way in direction of the stairs wordlessly. I am passing by several security managers and entering the reception zone. I am one of the earliest to arrive at this year’s Körber History Forum (#KHF2017), feeling a bit disorientated, lonely in these rooms. Do I wear the right clothes? Whom to speak to, if you do not know anybody?

The opening in the well-filled Carré is to be delivered by a pre-Merkel-politician. In these dimensions somebody that I mainly know as history – not as active in my personal political world. When Joschka Fischer became minister in the first social democrat-green government on federal level 1998 I was just to celebrate my second birthday. But images – of a minister in trainers – still offer a spirit of an awakening, some kind of political pioneering spirit. And this continued partly also throughout Fischer’s mandate, just exemplary thinking of his speeches on a federal European Union.  At least for that day, Fischer’s ‘time of trainers’ seems to be over.

“The End of the West as we knew it?” – a quite ambitious issue chosen for this keynote speech. But what does “the West” mean? Is it an expression of the fight for or status being liberal democracies? Is it limited to the good old US-West European transatlantic friendship or is there a wider understanding possible? Does the West require an East? If yes, is this still an appropriate perspective to look at our globalised world? Who is in – and who is out? Finally: What’s the role of the European Union in this concept?

All those have been questions in my head before the start of the Körber History Forum. To me personally, the West is a multi-dimensional concept. One can identify thoughts, governments, lifestyles or persons as Western, but a state? Maybe that has been possible in the Cold War – but today?

The West is not the Occident

Joschka Fischer starts his speech by cutting the question mark of the speeches’ title. In this way the end of the West is already executed. I am a bit disappointed, hoping to hear him mentioning arguments for both perspectives (end or not-end) before. This reminds me a lot of his book ‘Is Europe failing?’ (german: “Scheitert Europa?”), published in 2014.

But I continue listening. Fischer lines out that in his perception the West does not mean the Occident. The West has – from his point of view – been founded in 1941 with the Atlantic Charter (by Churchill and Roosevelt) and continued up to our days in the NATO as a political and security alliance. The West as a community of fate. Political awakening sounds different.

Mrs Franziska Augstein sitting next to me is smiling. Later she will question parts of Fischer’s perception. Like always during the Körber History Forum she is giving some cough pastilles to her neighbours.  Fischer meanwhile proceeds by diagnosing that (t)his community of fate has started its self-abdication, its self-destruction. The Brexit and the presidency of Donald Trump causing a loss of confidence in the security guarantees are crucial to him. 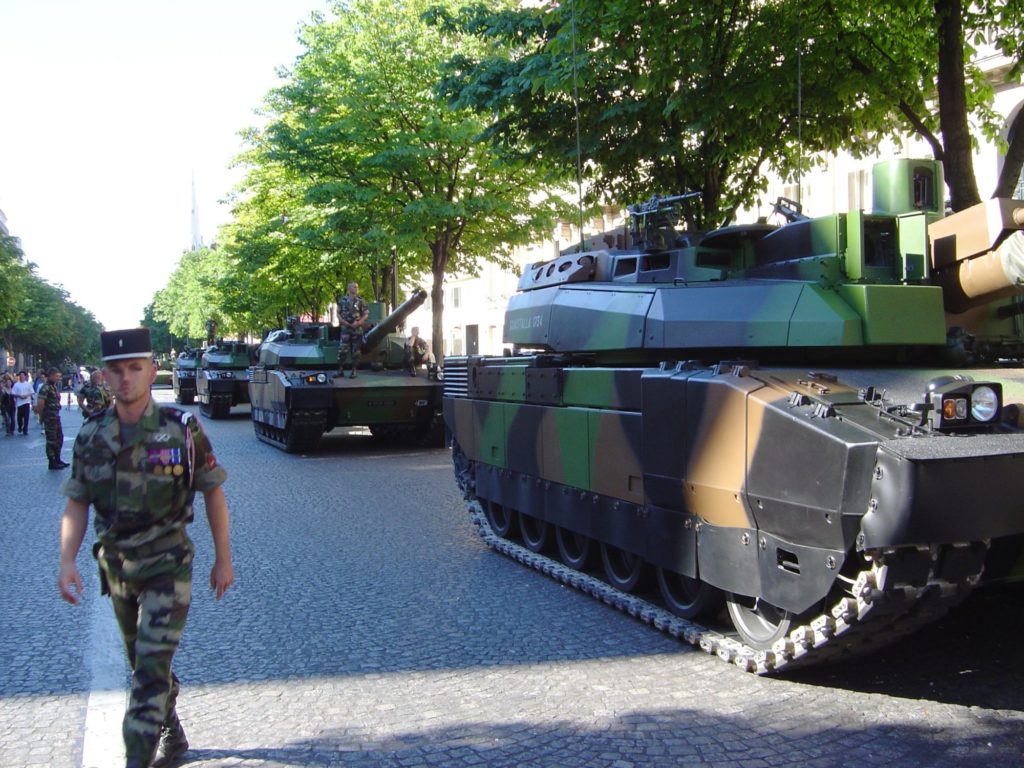 Security. That turns out to be one of the main topoi of the former politician’s speech. The end of the West as we knew it as the end of stabilizing security guarantees for Europe. But what does being Western mean to me, might furthermore mean to politicians? Or am I doing a mistake by mixing up my identity as European with the concept of the West?

I do not state that Fischer is wrong with the statement that the concept of the West is radically changing, but I guess we need to reflect that on additional levels, especially on more individual ones: The success of populists being voted, the loss of trust in our democracies, growing nationalism and blaming globalization for everything. All these aspects challenge our Western societies. They challenge shared values and ideas. They change our image of the West – the image of ourselves.

Seeing the radical protests against any form of free trade, following the tragedies of human dignity being stepped on at European borders or watching Western and Westernised societies losing their plural discourses makes me worry about the future of the West. The future of its values. But that does not mean that we are left to resignation. We need to be awake, be aware of these changes and we need to address them critically, not only in our social bubbles – but beyond. 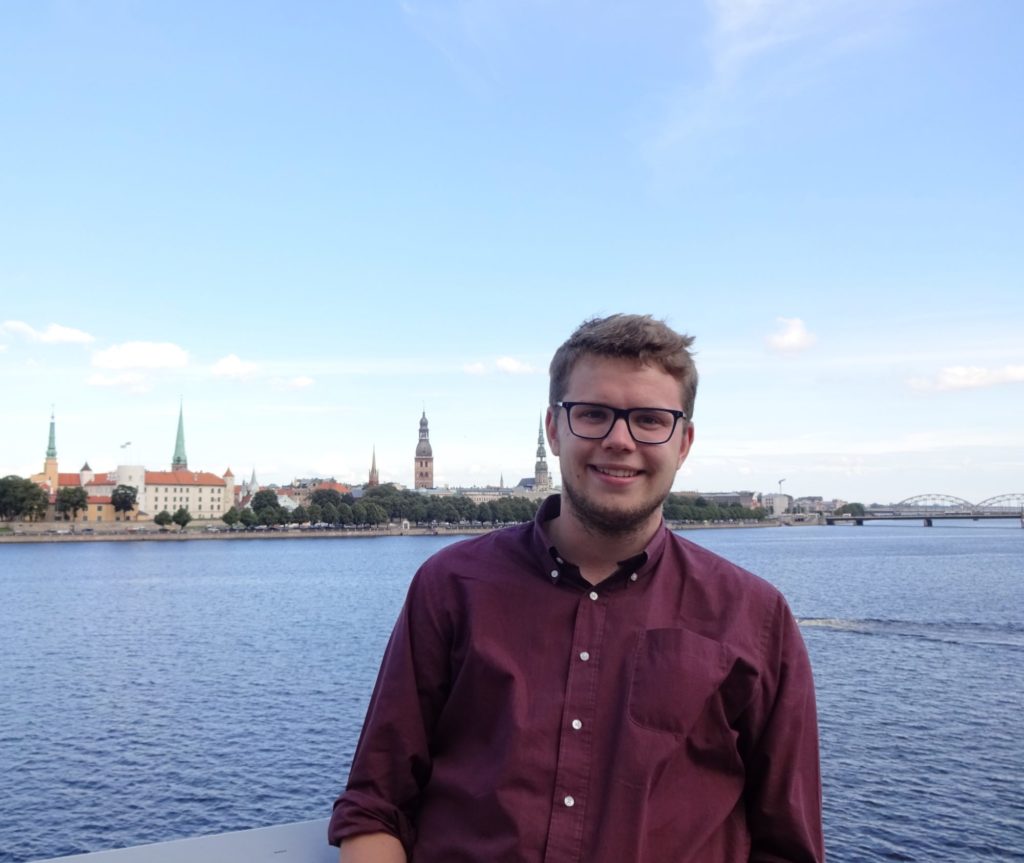 Our author in Riga. A city of the West? (Photo: Gregor Christiansmeyer)

In my opinion, what we should not do is just worrying and leaving the serious question marks on the West to our politicians. The West is not (only) about security. It is about our societies and economies; it concerns every one of us. When Fischer states that Europe can’t stand on his own, that it needs the West, I counter that Europe is not alone: there are millions of Americans – as well as many others – fighting together with it. Maybe there is an issue on the global leader’s level, but we still are societies of citizens and we should not allow the world politics to overcome the principles we belief in. There are difficult times ahead.

Fischer has been an idealist in his youth, became a realist while being politician, but now – at least according to his speech and other recent statements – he has become a pessimist. Even if he still believes in certain values and ideas, he does not seem to believe anymore in their realisation. He has lost his pioneer spirit. One does not need to be super-optimistic looking at the future of our Western democracies – neither am I – but we need to give them a chance and we need to fight for them. Maybe it is time for another 1998, not only in Germany but in civil societies of the whole West. There are already relatively young politicians like Macron, Trudeau or Varadkar mixing up the West, but we still lack of young faces and visions for our future – not just by career politicians (like the as well young Austrian Kurz) and well known faces. Let’s be active and create a new political awaking – it does not have to be perfect, we just need to start!

Video of Fischers Keynote Speech on the Körber History Forum 2017

Fischers Speech on the Future of Europe (German text edition)

Gregor Christiansmeyer
(1996) is a German Eustorian who has been doing his Bachelors in history and political science in Münster; after a year of internships he currently is a graduate student in Göttingen. He enjoys meeting new people, having discussions and fun together. Gregor is always delighted when he finds nice postcards in his letter box – they have got a place of honour in his room.