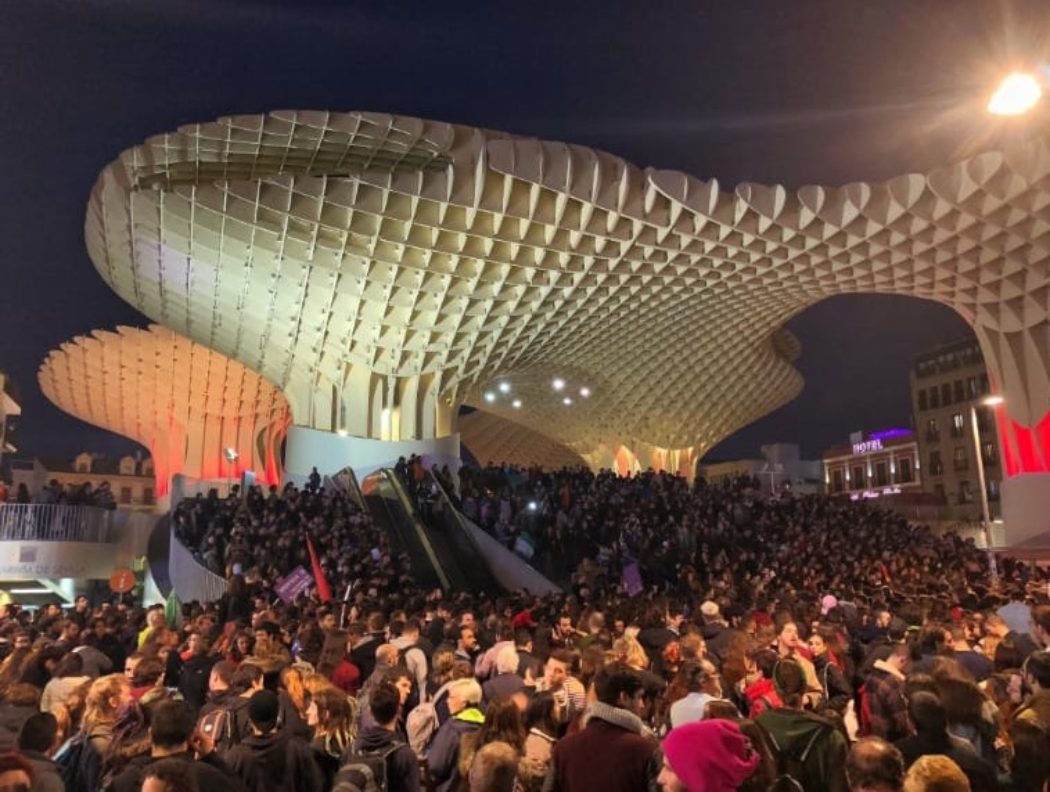 Protesters in Seville below "Las Setas", a known monument of the city. (Photo: Private)

A clear victory for the social-democratic PSOE on  the one hand, the rise of the extreme right-wing party Vox and its ascent to the Spanish Congreso on the other: These are without a doubt the internationally most discussed results of the recent general elections. But with the region of Andalusia, Vox already entered a regional parliament in 2018. The so-called “Iberian Immunity” against far-right parties after the end of the Franco dictatorship seems to be broken. Our author Miguel from Andalusia describes the reasons for this development and reactions to last year’s unexpected victory – bearing in mind that European elections are just around the corner.

Vox’s victory in Andalusia was important for several reasons: It is the most populated region in Spain with a strong agriculture and tourism sector. Most of all, it has been the stronghold of Spanish socialism throughout the country’s democratic era, until now. Since the Spanish democracy was re-born forty years ago, the Spanish Socialist Workers’ Party has won every single election in Andalusia, until now. 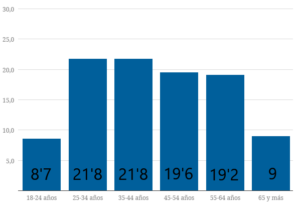 First thoughts about the Vox-voters being particularly composed of the older part of the population which is nostalgic about the old regime, were not accurate. A considerable part of the voters were young (the exact percentage ranges from a tenth to a third of its voters, depending on the definition of “young people”. If we consider persons under 24, it would be a tenth, if we talk about people younger than 34, it would rise to a third). Knowing that more than 300,000 voters participated in elections for the first time, we can observe that Vox seems quite appealing to them. There are two main reasons for that: Vox’s propaganda and the current situation in some regions. 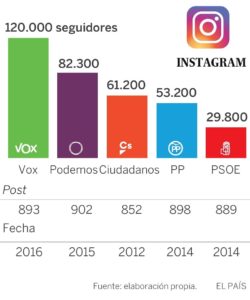 The number of followers, posts and year of creation of the Instagram accounts per party (Data: @vox_es)

Because of its little political relevance,Vox was ignored by the mainstream media for a long time. Consequently, it developed new ways (at least new in Spanish politics) of presenting itself, mainly via social media like Instagram and Youtube, and by using forms like memes, which have a great reach at little cost. It was also thanks to their successful use of the media that they were starting to become relevant political forces. With short and simple messages in these forms, Vox adapts to the young perspectives. In short, the party seems to have a similar way of seeing the world and showing its ideas about it like young voters do.

The discontent of the people

The other point is the discontent with the current situation in many localities. Dissatisfaction of many voters is caused by unemployment, which grew after the Crisis of 2008 that even hit the economy of certain coastal regions that are dependent on tourism. These same regions, like Almeria or Nijar, were the main points of entrance of illegal immigrants in the following years. The situation worsened and the tension grew due to conflicts between immigrants and the Spanish, as the latter felt the intensifying competition on the labour market. Moreover, a range of cultural shocks, like the fact that one of the most traditional Andalusian meats, which is pig, is requested to be banned from some school canteens because it is prohibited by Islamic regulations, complicates the situation even more. Besides, the different languages produce many misunderstandings.

For many of the unemployed who are struggling to get a job, the traditional parties not only failed to solve the problem of unemployment, but also made it worse with their politics of immigration, which in their opinion only intensifies the competition in an already tense situation. Although illegal immigration in past elections was not a matter of concern, the continuous growth of it has finally caught the attention of those voters for whom the anti-immigration politics of Vox seems the only real option to improve the situation of the country.

The other reason for the rise of the right-wing populists is the independence movement of Catalonia. This means a heavy strike against the predominantly conservative value of national unity and conservative voters consider Vox the most active fighter against it. Because of that, traditional right-wing towns and regions have switched their vote to Vox instead of the other right-wing competitors.

… and what do people think about the rise of Vox?

To get a more detailed insight into the young Vox supporters’ minds, I spoke with two university students. Juan is 19 years old and a student of political science and public administration, Gonzalo is 22 years old and studies economic and business sciences. These are not their real names as both have chosen to remain anonymous.

What do you think about the good results of Vox over the past elections?

Juan: That it was easy to foresee.

Juan: The parties that have been ruling over this country have been weak in the management of many important affairs, like immigration or unemployment; even the right-wing parties have not found any solutions. When a party with a clear view of what needs to be fixed appears, this is noticed by everyone.

Do you think it will spread through the country?

Juan: Oh yes, definitely. This only has been the beginning of something very big.

What do you think about the good results of Vox over the past elections?

Gonzalo: They are a good sign of how pissed people are about the lack of action by some political parties.

Gonzalo: Yeah, mainly the left-wing ones, always trying to please the nationalism of some regions. They have stopped the right parties from doing what they considered necessary.

Do you think it will spread through the country?

Gonzalo: I think it will, but they will remain a small party which will help the bigger right-wing parties to get their measures going and rule in some places in coalition with other parties.

The answer to the rise of Vox

But there are different voices among the Andalusian youth. In the days following the elections, when the main parties were still shocked by the unexpected success of Vox, young associations and groups of people in Andalusia took the lead in reacting to Vox almost spontaneously.

Protesters in Seville near “Las Setas”, a known monument of the city. (Photo: Private)

The morning after the election, several protests were summoned in the main cities, composed mostly of the youth of the regions, which were heavily against Vox’s anti-LGBTI politics. Also their position against the current Gender Law, which Vox blames to protect the women over the rights of men. These early manifestation of disapproval took place in the cities of Seville, Granada and Malaga. The following day, people were shouting “Andalusia is not a place for fascism!” or “Vox listen, Andalusia is up to fight!” across the whole region. During  these protests, hundreds of young people gathered, in some cities even thousands of them. However, in Huelva and Almeria, not more than four hundred people joined the protests.

What do those who stood against the rise of Vox think?

Why did you decide to go to the protest?

Alicia: Because many of Vox’s political objectives are against everything what I believe in.

Alicia: Their changes of the Gender Laws, their views on LGBTI are just anachronistic; they belong to

the politics of the past century.

Do you feel disappointed?

Alicia: Totally, I thought better of us. At least for not voting those who defend measures that would only bring pain to the society.

Why did you decide to go to the protest?

Rodrigo: Because I am deeply against any political party that defends the prosperity of some over the misery of others. Their immigration point of view will basically mean the death of hundreds, just so we only have to deal with the problem of finding a place for those people in our society. It is deeply selfish.

The protest in Huelva was quite small; do you think it was because of apathy?

Rodrigo: No, no at all. In Huelva many of us were in a period of exams, many couldn’t go because they had to attend or prepare for them. But I am sure they were with us.

Your answer implies that the main part of the manifestation was university students. What do you think is the cause of that?

Rodrigo: The young people are the main defenders of these modem ways of doing politics. Our fathers have seen governments quite close to the ideology of Vox, democratic and non-democratic. In their minds it is just another option of many but for us it is unacceptable. We have the urge to stop what goes against everything we believe in.

As these examples have shown, the youth is divided between those who see Vox as their best option. To let the economy recover and maintain the unity of Spain. And those others who consider them as a danger for the LGTBI and Gender Rights. A xenophobic party, which uses unemployment as a pretext to fight against refugees.

Many see the unexpected victory of Vox, as the first step of an unstoppable rise. With the General Elections on 28th of April, we may get an answer soon. The worries of the people that helped Vox in its rise and the critics that stopped it from going further remain. They are pretty much the same in the rest of the country. The main concern for those who oppose the new party and the principal hope of its supporters is that if Vox has such a good result even in a traditionally left-wing region like Andalusia, its success could be even higher in regions where the right-wing parties have always been strong, like Ceuta, Melilla, La Rioja or Castilla and León.

A piece of something greater

But Andalusia and Spain are not a sole case. The first estimations about the European elections talk about how the main parties that have had guided the European Union, the Progressive Alliance of Socialists and Democrats and the European People’s Party, the moderate right and left parties, will not sum up more than half of representatives. Part of its losses will be gains of the Movement for a Europe of Nations and Freedom, which for example could rise from one Spanish representative to twelve. The more far right-winged parties are growing not only in Spain but through all Europe. The elections of the coming months will be of great importance for the success of these parties.

Miguel
My name is Miguel. I was born in 1999. I love reading, writting and most of all travelling and meeting new cultures. History Campus provides me of all of that... My other passion is fantasy and history novels.