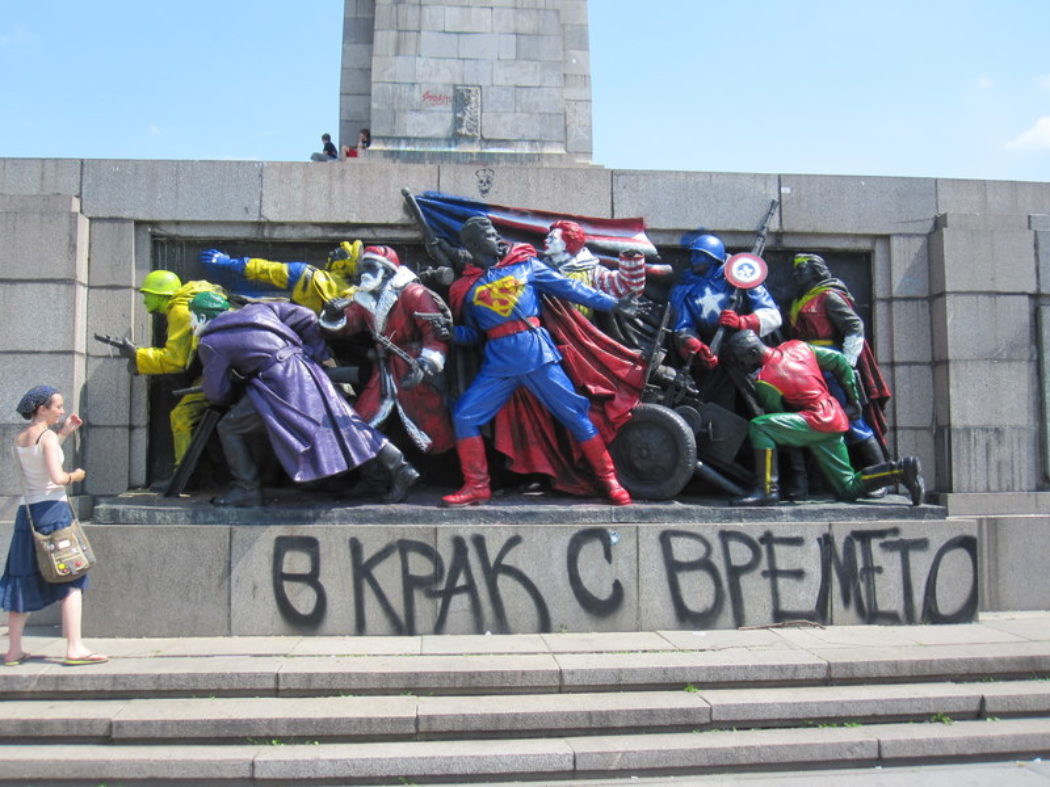 Strolling around Bulgaria’s capital Sofia, one can hardly miss the memorials erected after World War II containing characteristic elements of communist monumental art. Sofia’s Red Army Monument, built in 1954 to commemorate the liberation by the Soviet Army, is among the most widely disputed one. Throughout the years, the monument has been used as an instrument for political expression, vandalism – or some would call art.

In June 2011, a group of anonymous street artists transformed the monument into a tableau of American comicbook characters. The Bulgarian capital woke up to the view of Soviet Army soldiers dressed as super heroes and pop art icons. Among the characters were Superman, the Joker, Captain America, Ronald McDonald and Santa Claus. While the art composition stirred the curiosity of the tourists, some found a deeper meaning in the installation, suggesting that the authors depicted the state of affairs in Bulgaria, which is split between the traditional relationship with the Soviet Union and the modern influence of Western capitalism.

As of August 2013, the memorial was painted pink in reference to the Czech installation artist David Černý, who famously painted a Second World War monument of tank crews in pink. Below the figures of Soviet soldiers reads the inscription: “Bulgaria apologises“, in both Bulgarian and Czech, an apology for Bulgaria’s support of the Soviet troops who invaded Czechoslovakia in 1968 to crush democratic reforms – otherwise also known as the Prague Spring.

During the 2014 Euromaidan revolution, the monument was used as a canvas to show support for Ukraine and later to defend Ukraine, this time as a reaction to the invasion of the Crimean Peninsula by Russian troops. Not only was the monument painted blue and yellow in the colours of the Ukrainian flag, but signs proclaiming “Glory to Ukraine” and “Hands off Ukraine” appeared beneath one of the soldiers.

For over four decades, the memorial has been functioning as Soviet propaganda – what does its future look like?  Some want it to be removed, seeing it as a monument that no longer serves its initial purpose. It is also interpreted as a symbol of Soviet occupation: as a reminder of an army which forcibly established a regime which ruled Bulgaria for 45 years, a regime which was declared criminal by a law promulgated in 2000.

For others, it is the perfect public space to settle down at with a long-awaited beer after work. Concerts are held at the monument – even the annual Pride afterparty is celebrated here. Most importantly, this is the location of the annual Victory Day celebration in which Bulgarian veterans of the 1944-1945 campaigns against Nazi Germany are honored.

Liliana
Liliana is a 4th International relations student based in Sofia, Bulgaria with profound interest in diplomacy, human rights, and international security. Passionate about dancing, travelling and mountain climbing.